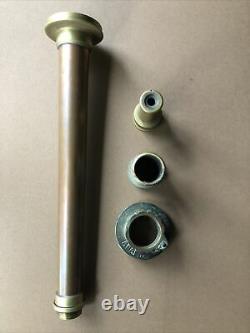 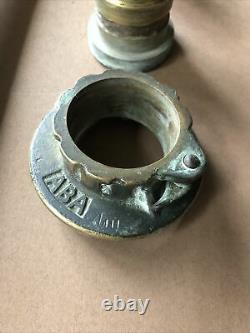 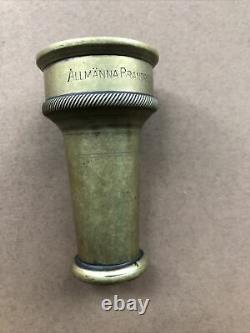 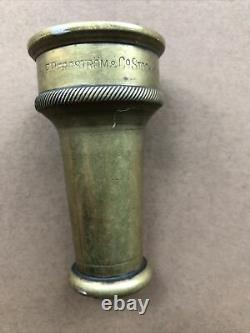 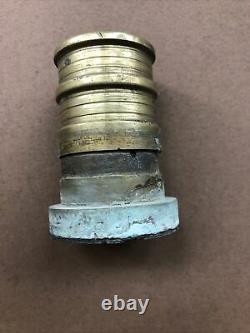 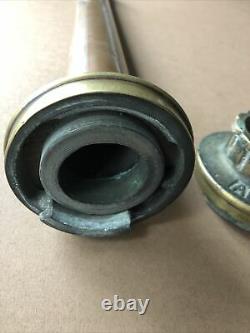 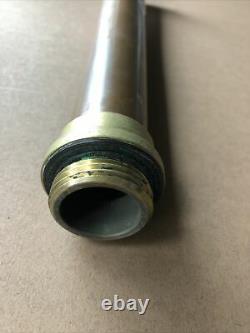 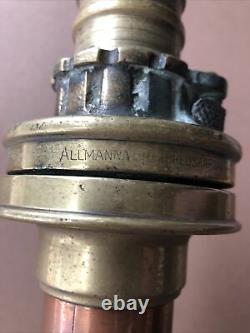 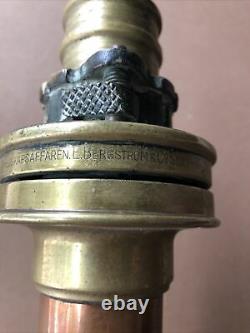 This nozzle was manufactured by E. Bergstrom &Co, a leader in the fire fighting equipment industry. See below for historical information regarding this maker. The nozzle is 25 long made of brass and copper.

The parts are free moving and can be disassembled and reassembled. These nozzles are stamped with Allmänna Brandredskapsaffären E. Two sources of more information about this company follow. The first patent for a hose clamp as we know it was granted by the Swedish Patent Office to inventor Knut Edwin Bergström, in 1896. Shortly thereafter, Bergström founded Allmänna Brandredskapsaffären E.

Bergström invented, among other products, a hand-operated fire engine that utilized flexible metal tubing instead of a rubber hose, along with mechanical ladders and special rescue ropes. In 1918 Bergström was honored by the royal decree that only the ABA hose clamp should be used as the standard clamp for fire hoses across Sweden. The chance for Bergströms hose clamp to achieve wide acceptance came in 1932, when the Norwegian company O.

Dahl became aware of ABA. The sole agents for Northern Europe, they were impressed by ABAs new clamps, which now included a worm-drive, and thereafter widely distributed the product throughout their territory. Around this time, Knut Edwin Bergström handed over the reins to his son, Erik Bergström, who restructured the company to focus more on its international orientation with an emphasis on manufacturing ABA hose clamps. With increasing postwar industrialization, specifically automobile and aviation production, the demand for hose clamps continued to grow.

By 1963 ABA was producing 2.5 million clamps per year, and Erik Bergström expanded the companys facility in Vattholma Bruk in several stages. Employees were still hand-building clamps one at a time, but by the early 70s, ABAs engineers were introducing the first semi-automatic clamp-manufacturing machines, which gradually increased production. Erik Bergström retired, and from 1972 through 1986 ABA was jointly owned by his sons Tor, Jan, and Nils, the third generation of Bergströms to lead the company.

In 1986 Nils acquired his brothers shares, and became managing director. In 1990 ABA once again merged, this time with the Swedish firm Anderstorps Werkstads AB, or AWAB, another respected hose-clamp brand familiar to boatbuilders around the world. Subsequent to the merger, production at the new ABA Group moved into AWABs former plant in Anderstorp, where bands for clamps were manufactured and AWAB clamps were assembled. Growth also continued abroad, with the addition of a 10,000-sq-ft (929m2) plant in the United States in 1992, which closed in 2008.

The company now maintains a 74,000-sq-ft (6,875m2) domestic facility for U. Plants were also set up in Belgium and The Netherlands around this time. The origins of Connecting Capital are to be found in a traditional family business operating since 1896. Connecting Capital has its roots in a traditional Swedish industrial company, Allmänna Brandredskapsaffären (ABA the General Fire Equipment Store), which was founded as far back as in 1896.

Over three generations, the company grew strong, evolving from a small manufacturing business into a large global industrial player. Following the divestment of the holding in ABA, the capital built up works on through Connecting Capital. Allmänna Brandredskapsaffären was established in 1896 by Edwin Bergström, the inventor of the standard fire hose coupling, which is required by law in several countries. ABA branches out into fire equipment in general, steel piping, couplings and hose clamps. Production is based at Wattholma Bruk in Sweden and in the Netherlands.

The company focuses on hose clamps, considerably extending its range. Operations are established in the US and China. Market growth through company acquisitions. ABA merges with the German company Norma. In 2008, Connecting Capital was established, built on the equity generated through the former ownership of ABA.

The name Connecting Capital is of importance as it reminds us of our origins. Today, we establish connections between generations, capital, individuals and companies, which recalls our original work with connectors. The item "Antique Copper Brass E. Fire nozzle Stockholm Sweden RARE" is in sale since Tuesday, January 26, 2021. This item is in the category "Collectibles\Historical Memorabilia\Firefighting & Rescue\Hoses & Nozzles".